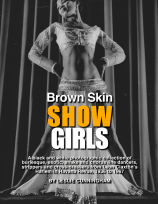 From making film to writing lyrics to painting on a blank canvas, I am at peace in the world when I am creating. A writer, visual artist and documentary filmmaker, I come from a family of artists and musicians from Los Angeles, CA. As a kid, all I ever wanted to do was go to … END_OF_DOCUMENT_TOKEN_TO_BE_REPLACED

Leslie is an artist, documentary filmmaker and storyteller who feeds her hunger by producing daring and entertaining narratives that represent a diversity of subjects and communities. A graduate of the documentary arts program at the Center for Documentary Studies at Duke University in North Carolina, Leslie’s collection of engaging documentary film and videos have screened on public television, online and at film festivals in the U.S. and internationally.

Leslie is the creator of TRIBES Magazine, an award-winning online publication known for telling stories from the frontline of urban arts and entertainment. Her popular show TRIBES TV covered North Carolina arts and community events and aired on public television stations, including Durham Community Media and The People’s Channel in Chapel Hill, NC. Popular episodes included: The Big Freedia show in Durham, Shelly B, The Queen of NC Hip Hop, and Triangle Black Pride. A public broadcasting hit, TRIBES TV spread Leslie’s reputation as a local media institution to citizens around the Triangle.

Leslie is a member of Soka Gakkai International (SGI), a worldwide Buddhist network which promotes peace, culture and education through personal transformation and social contribution. She is also member of Film Fatales, a non-profit which advocates for parity in the entertainment industry and supports women directors, Leslie is committed to mentoring young female filmmakers.

Leslie in the press

Logline: The glorious legend of Leon Claxton’s Harlem in Havana, a so-called Jig Show that endures racism, segregation and immigration laws to become popular in the 1940s through the 1960s. Read more.

M.I., A Different Kind of Girl

Logline: A male impersonator struggles to find acceptance from her families and the male-dominated drag community. . Read more.